Early in November, my parents were looking to take a little trip somewhere as a small getaway. They asked me if I wanted to tag along and if yes, I’d only have to play for my flight. Obviously I couldn’t say no to that.

So we started to look for possible destinations. We definitely wanted to head south for some better weather, but we also wanted to have a city closeby since it would be dark early in the evening. And so we ended up booking tickets to Pisa in Italy with the plan of visiting the north of Tuscany and the south of Liguria.

We once again flew Ryanair because since you might know by now, I really like that airline company. And once again, nothing to remark. Friendly staff, flight on time and everything as wished. I’ll probably never get why it’s listed among the worst airline companies in the world.

Since we were planning on roadtripping, we obviously were in need of a car. We rented ours via Auto Europa (Previously ‘Sicily by Car’) and everything was perfectly arranged. You can even get an insurance for everything or an insurance with an exemption (for which you can insure yourself as well). We paid 110 euros for five days, with the insurance for the exemption included. For that price we got a lovely Fiat Panda which was really comfortable for three people and luggage.

It’s really important to get an insurance in my opinion. This way you have less to worry about. Especially since the region is notorious for car theft. Unfortunately I’m speaking from experience since on our last day of the trip they broke into our car and stole all of our luggage. So be warned and don’t leave any expensive things in your car whenever you’re visiting the area. It can happen anywhere but I already know many people who have been a victim in the Tuscany area.

Anyway, we arrived in Pisa early in the morning, so we still had plenty of time to visit this city on the first day of our visit. Which is also what we did.

We parked our car along the water and first enjoyed a late breakfast with an amazing view. As you can see, the weather was also on our side, which made it that much lovelier.

Then we continued along the water towards the centre of the city. We passed the Teatro Verdi and a really friendly man asked if we were interested in taking a quick look at the theatre. We took him up the offer and were quite surprised that such a beautiful place wasn’t advertised more for visits. And it was even for free! So if you’re passing the theatre, don’t be scared to just take a look inside! 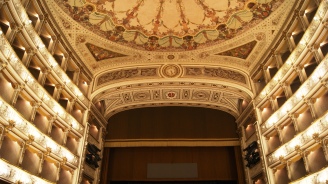 Next we headed along the Via Guglielmo Oberdan, a lovely trafic free street, to the Piazza dei Cavallieri. On that piazza you can find the homonymous building which has a really beautiful facade. 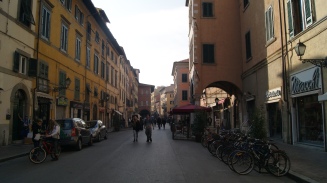 Along the way, there are also really lovely sights. It’s a city where you sort of have to allow yourself to get lost a bit.

And then we arrived the the place to be in Pisa; Piazza dei Miracoli. On this square you can find the Duomo, the Battistero and the famous Leaning Tower.

You can visit each one of these sights. The Duomo is for free, but isn’t all that special on the inside (Probably the reason why it’s free). We didn’t visit the Battistero since we didn’t have much time, but we did of course climb the leaning tower. You have to get tickets in the building behind the tower and then you’re allowed to go up at a certain time. You must leave all your bags behind and are only allowed to take your camera upstairs. The entrance price is 18 euros but the view is definitely worth it. 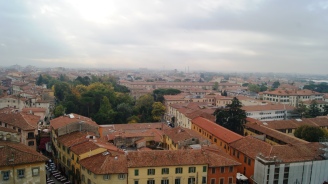 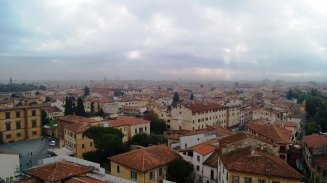 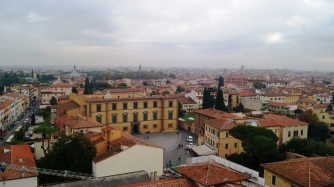 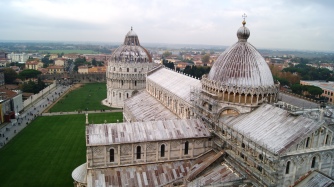 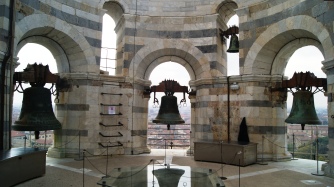 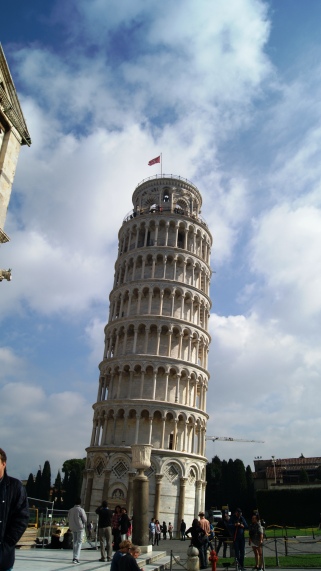 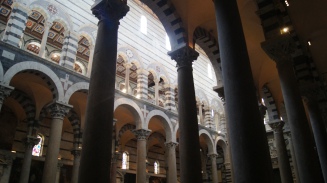 As you can see, it’s just really remarkable and definitely my favorite place in Pisa. At night, it’s also really lovely but subtly lit.

One evening, we had dinner in Pisa as well, and it was the best place ever. It’s a restaurant called Osteria I Santi which can be found on the Via Santa Maria. Even though it’s still very in the center, it felt a lot less touristy and the food was simply to die for. Best dinner of my entire trip.

During our trip, we also stayed in a B&B in Pisa; Le Ciel d’Orphée. This is a hotel a bit out of the city so you kinda need a car to go to the city. But it’s only 2km from the tower and you can actually see the tower when you’re in front of the hotel.

For three people, for two nights we paid only 120 euros. For that price we got two rooms, with a small kitchenette and we could also use a well stocked kitchen downstairs. Breakfast was also included but everything was conserved so no fresh bread etc. We knew this in advance so that was no issue for us at all. It’s a really good price and it’s nice to have at least some breakfast before leaving your hotel. For those interested; there is a bakery a bit down the road that has fresh pasteries. But I was very pleased with this hotel. It had everything it needed and the staff was really nice and helpful. 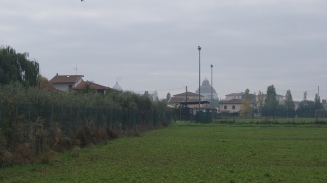 On the way from Pisa to Lucca, we took a little detour around Marina di Pisa. That wasn’t all that interesting, but we did stumble upon this lovely place which made it all worth it again.

And that was all for Pisa. As you can see I’m doing this a bit different than my usual travel posts as this is the first roadtrip I’m reviewing. But I’ll try to keep it as clarifying as possible. Next up will be some information on the city were we stayed another two nights; Lucca.