They always say you should start the day the way you ended the previous one, right? So that’s exactly what we did.

We retraced our steps and walked back to Plaza de la Catedral where we spend most of our evening the day before. It’s weird how different a square can look by night and by daylight. This time, we also took a quick look inside the cathedral. It’s not that special, but still a really beautiful building. Sadly we were wearing shorts and tops so we weren’t allowed all the way inside.

On this square you can also find many street artists dressed up as traditional Cubans. Just give them a little tip and take as many pics as you like.

And then it was time for some history. Time to visit the Museo de la Revoluciòn. This isn’t a museum as I’m used to see them as it’s quite sober. On top of that the main thread through the museum was only in Spanish and since my Spanish is quite limited I had a hard time understanding most of it. Luckily I had already read a bit about Cuba and the history before departure and also the captions of the objects were also in English so I managed. It’s definitely a place you can’t miss when visiting Havana as the revolution is such a big part of their history and you can also see the Granma, the yacht with which the rebels arrived in Cuba to overthrow the regime. Entrance to this museum is 8 CUC. 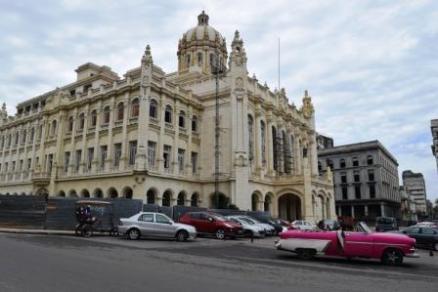 A bit smarter we left the museum and took a relatively short time picking out the right cab to take us across the water. In Havana you can find many classic cars who drive around as taxis so you definitely won’t have difficulties finding a cool one. Our gray aged beauty took us to Castillo de los Tres Reyes Magos del Morro for only 5 CUC. The tower or castle itself didn’t really interest us, but the view from there was simply magnificent even with the cloudy weather. 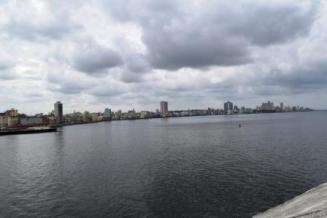 After buying some souvenirs from the stalls up at the castle, we took another cab back to the Capitolio. We read that there was supposed to be a sigar factory behind the building, but sadly upon arrival we learned that it was closed. So instead we decided to spend our time getting a bit lost in the city of Havana and mainly the area around Chinatown. It’s just such a magnificent city.

While enjoying the Cuban sun on a bench, we read in our travel guide about the Hotel Nacional and an ice cream place in that area so of course we took another taxi to go check it out. Many illustrious guest have stayed in this hotel over the years and it has a lot of history of pirates and attacks. We didn’t dare to go inside but apparently you can just go to the bar and have a drink. Now we regret that we missed out on that.

Instead we continued to ‘Coppelia‘, the place in Cuba to get an ice cream according to the travel guide. There were only two flavors to choose from and the ice cream was nothing compared to what we’re used to (maybe we’re spoiled in Europe) but it was quite an experience. Apparently Cubans often queue up to two hours just to get an ice cream from that place. Luckily it wasn’t that busy when we passed.

After a(nother) cocktail stop along Avenida 23, we walked back to the Malecón. The sun was starting to set and it was the perfect scenery to walk the entire walk from there back to the old center of Havana. One of my fondest memories of my trip.

For dinner we headed  back to Plaza de la Catedral where we had spotted a restaurant the day before; El Patio. This was obviously a lot fancier than what we actually were aiming for but we decided to just go for it. It was good but nothing special so I don’t know if I would actually recommend it. And I’ll never forget that I don’t like a Cubanito. I was going to go for a cocktail I didn’t know, just to be daring, but forgot to ask what was in it. So I ended up with a tomato juice one and I loathe tomato juice. Ha, my bad.

To swallow the tomato juice, we headed back to Cafe de Paris, where we had also ended our first night, for a few cocktails before going to sleep. Another successful day in lovely Havana.