After a long, long bus drive from Viñales, we finally arrived in Trinidad. As we got off, the sun was greeting us again after a long absence, so we were full of energy to discover this area of Cuba.

Trinidad was founded in 1514 and is situated in the center of Cuba. Together with the nearby Valle de los Ingenios, it has been a UNESCO World Heritage Site since 1988. While it wasn’t the part of my trip I was looking forward to most, it ended up the best days of the entire vacation.

For our three nights in Trinidad we stayed in the lovely Hostal El Atico. This hostal is situated only one street from the Viazul bus stop so no long struggle with the luggage.

We did have a struggle to get the luggage up the stairs, but the room was totally worth it. It was such a spacious room and the little terrace we got with it was perfect. The bathroom was a little smaller and the “glass walls” were a bit weird as you got the feeling everyone in the room could see you in the bathroom. But still, more than what we expected.

The host family – including the cute dog ‘Floppy’ – was really nice as well. They helped us get around the town and gave plenty of tips and advice whenever asked. We also had dinner with them once and as usual it was great. The banana chips (or whatever they called them) were to die for!

The Town of Trinidad

After settling we were eager to start discovering this seemingly beautiful town. It’s a tangle of streets and easy to get lost in but oh so wonderful to let yourself get lost.The colorful houses and cobblestone streets are easy to fall in love with. Here I felt most like I was in colonial Cuba.

We started off by going in the direction of Plaza Major and wandered those streets for a while. After a quick energy stop in a rooftop bar for a tasty cocktail (What else?) and a lovely view, we also visited the most recognizable building of Trinidad: Museo Nacional de la Lucha Contra Bandidos. This yellow bell tower is the sight of Trinidad but the view from there is simply marvelling. Especially around sunset. 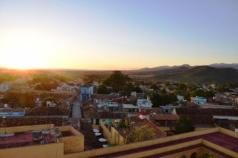 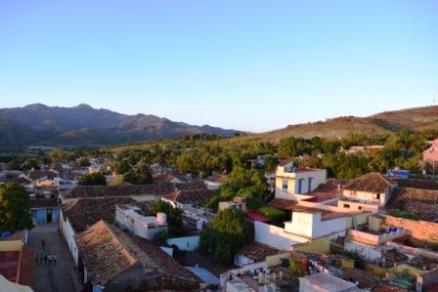 Later during our stay in Tinidad, we also returned to visit the Museo Romantico. Once again the museum itself wasn’t all that special (it’s still worth it to take a walk around though!) but the view from the roof was more than spectacular. (Yes, I’m a sucker for views, I know.) 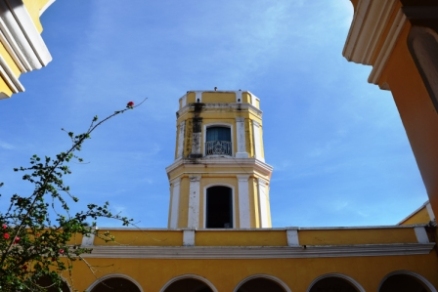 Most tourist tend to stay in the center of the town – which is pedestrian area only by the way- , but don’t be afraid to wander the outskirts a bit. We walked all the way to the Plaza de las Tres Cruces (Three Crosses) and then walked all the way up to the ruins of Nostra Senora de la Candelaria church. The ruins itself aren’t impressive at all but once again a worth-while view on the city.

You might get addressed by the locals along the way, but they mean well. The kids playing in the street will simply come ask for some candy and older people will ask for pens or other utilities (or a little peso) so if you have the possibility, carry some of those things with you. The smile on those people’s faces as you give them something is so worth it.

Our last morning in Trinidad we spend chilling on Plaza Carillo. This felt like a little more modern part of the town and it’s also the place where the only two hotels in the city can be found. The square is really charming. 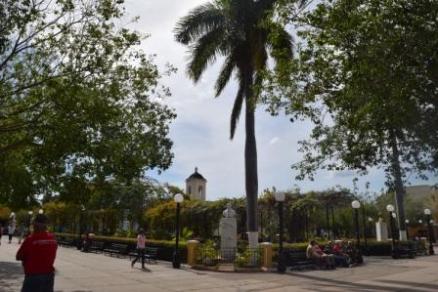 While in Trinidad, we once had lunch and once dinner in a restaurant/bar called Sabor Tropical. This place can be found on Calle Gutiérrez and lured us in with the mention of burgers. I had a chicken burger there and it was really good. My friends also didn’t complain about their choices, plus it all was quite cheap as well. I can definitely recommend this place.

We also ate at Monte y Mar but that was a big fat no. Through our travel agency we’d gotten a discount voucher so we decided to check it out. The food was cold, the staff was unfriendly and my friend even got the wrong order. We suspect it was because they had noticed our voucher, but still that didn’t mean we weren’t going to tip them well. It just sucks that a couple that arrived a little after you immediately gets “appetizers on the house” before even ordering and we got nothing. So no, you’ll never see me again at that restaurant.

Because this post would become to long if I included everything we’ve done those three days we stayed in Trinidad, I’ll tell you all about the excursions we’ve done in other posts. This way it’ll stay a bit more clarifying. Anyway, this town really charmed me and it was my favorite stop of our Cuba trip. I really hope to go back one day.

One thought on “CUBA: Getting the colonial feel in Trinidad”