One of course can’t visit Trinidad without also going a bit out of the way to the UNESCO Heritage Site Valle de los Ingenios.

The Valle de los Ingenios, also know as the Valley of the Sugar Mills, is a valley consisting of three interconnected valleys and can be found about 12km out of Trinidad. Those valleys are called San Luis, Santa Rosa and Meyer and were the center of the sugar production in the late 18th century up until the late 19th century.

Today you can still see the ruins of many sugar plantations, slave quarters and manors.

We had read on the internet before departing to Cuba that there was an old steam train going from Trinidad to the valley so we were very enthusiastic about taking that means of transportation to go visit the area. But apparantly the old steam train no longer worked so now it’s just an old train which seemed a lot less charming to us.

Our host then told us about a friend of hers who worked as a taxi driver and who was able to take us to the valley for 30 CUC. We hesitated for a while but then opted to go for the taxi driver as the train also only goes once a day and with the taxi we’d have a bit more freedom. And it was the best decision of our trip because that taxi driver was more than worth what we paid him. Instead of just taking us to the valley, he took us on a touristic trip with multiple stops through the valley.

First he took us to a look out of the valley along the way. The view was simply breathtaking. We didn’t want to keep the man waiting too long (the downside of having your personal driver) but I could have stared at the view for quite a bit longer.

Next we were taken to the San Isidro de los Destiladores. This is an archeologic site of a former sugar plantation. We were immediately greeted by a fluent English speaking man who asked us if we were interested in a tour around the site. We didn’t hestitate twice and followed him along the ruins of the bell tower, the mill, the slave quarters and even in the manor. He told us all about how life was on this site around the 1830s, especially for the slaves and was able to answer all of our questions. It was one of the most interesting explanations we got on our entire trip so a big thank you to our taxi driver as it would have been impossible to get there if we’d taken the steam train or even just another driver. 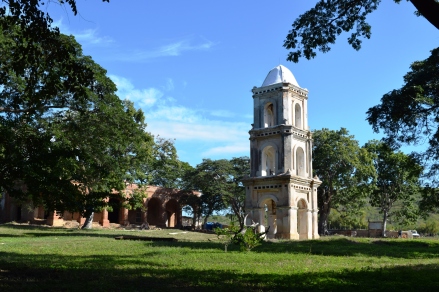 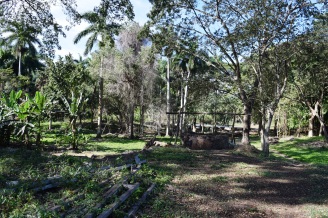 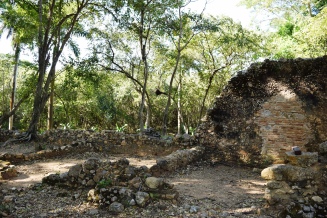 The only place we would have gone to visit without the help of our friendly driver would have been Manaca Iznaga and that was also our next stop. This place was founded in 1750 with a bell tower to watch the slaves and a manor to summon them.

The road toward the colonial manor and the tower are filled with stalls selling lovely knittings and souvenirs. It’s all very touristy yet the atmosphere was really great. 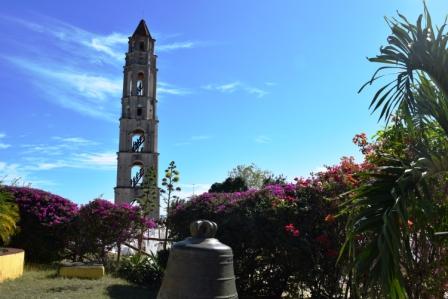 For only 1 CUC you can climb the bell tower and enjoy a marvellous view on the valley. It all feels a bit unstable and unsafe (the railings are really low!) but the climb is very much worth it. 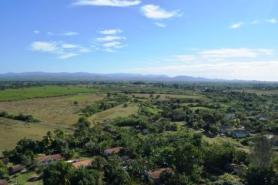 Our driver had also given us the tip to go through the manor restaurant to the back of the house as you can still see an old mill there. Once again a very interesting thing we wouldn’t have seen if we had been on our own.

Next we were brought to the Hacienda Guachinango where a plantation house still remains. That wasn’t very special and there wasn’t much to see, but it was still nice to see as it was in a very beautiful environment.

Before dropping us back off in the center of Trinidad, we were brought to what looked like a souvenir place where they were also making pottery. There in the back there was what our guide said was the oldest car in Trinidad that had once belonged to Charlie Chaplin. Since it wasn’t advertised or anything I’m very skeptical about this all, but still apart from that all it was quite an interesting car to see. It even had wooden wheels.

And that was the end of our visit to the Valley of the Sugar Mills. One of the best mornings of our entire trip, and that was mostly thanks to our friendly driver. We wouldn’t have seen half of what we did see if it hadn’t been for him. Needless to say he got a big tip and an even bigger thank you.

One thought on “CUBA: Discovering the Valle de los Ingenios”

On last weekend's episode of "Exploring my own country during #Covid": #Aalst! The second largest city in the province of #EastFlanders and here mostly known for its extravagant carnival celebration! 🎭 There was no over-the-top party this year, but with the beautiful #Belfry and an 18th century castle in its city center, it's still worth #exploring! I spent a couple of hours wandering the streets of this city, enough to see most of it. Now I'll just have a wait for the celebrations so I can get the full effect! 😁
The idyllic, green hills of #Oudenaarde, a joy to cycle through and explore. A good physique is a must, but it's worth the suffering!
I've travelled all over the world to visit national parks, but I hadn't even been to the only #nationalpark in #Belgium. Un-ac-ceptable! So today it was time to finally tackle that one! The #HogeKempen of course doesn't offer out-of-this-world views, but it was more than worth it to cross the country for the 13km and 6km #hike we completed.
It's no mountain range or a crystal blue lake, but it's not home, which in these times is already a big change of scenery! Yesterday and today I'm discovering the other side of #Belgium, the #Campine region! Beautiful nature views along the most amazing #cycling paths! We rode 120km yesterday but today we're strapping on our hiking boots to emerge ourselves deeper into #nature! 🥰
With that damned virus still having the upperhand, travelling abroad is currently, and for all of February, forbidden for me. Quite a bummer if you know that I always #travel this month. 😔 I could give you a full-on rant on how this sucks and blabla, but that wouldn't get us anywhere. Literally.
Just one of those views I'll never get tired of: The #Rozenhoedkaai in #Bruges! I've seen it many times by day, but only a handful by night. It's like magic! ✨