The main focus of our US roadtrip last month was to see as many nature parks as we could fit into our schedule. We ended up scratching seventeen National and State Parks off our bucket list, so it was a definite success.

But not every tourist likes to take a roadtrip. Many people like just a short get-away to a city like Las Vegas. And many who go to Las Vegas like to leave Sin City for a while to go see some of the natural beauty nearby.

Two of the parks close to Vegas which are often visited are Red Rock Canyon National Conservation Area and Valley of Fire State Park. But which of those two is worth a trip out of Sin City and which one isn’t? 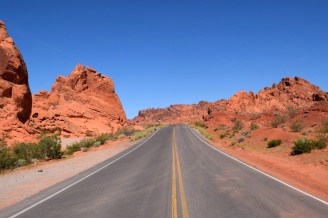 Both parks promise the same views: red sandstone and erosion. The closest option of the two is Red Rock Canyon. This park can be found 30 minutes west of Vegas. There are many tours leaving from the city to go visit this national park. Valley of Fire is a bit further out of the city; about one hour and a half north-east of Vegas.

We did both parks on our trip and one totally blew us away while the other was probably the least beautiful park of our entire vacation. So if you’re in Vegas and you want to go see some beautiful nature, leave the closest option of Red Rock Canyon where it is, and go a bit further to the Valley of Fire. You won’t regret it.

Valley of Fire is Nevada’s oldest State park. It offers a scenic drive which leads you along the most beautiful spots of the park. Breathtaking!

But in this park you also have to get out the car to do some hiking. We didn’t have a lot of time but we did the Rainbow Vista Trail which was definitely worth it. It was so beautiful and the hike itself was really fun as well. It did help that apart from a few other tourists mingling around we were on our own, which is something I love while being in nature. We also did the small Petrified Logs Loop, but that was a bit of a let down. There isn’t all that much to see apart from three petrified logs that are “caged”. Aside from those trail, we found the Beehives and the Seven Sisters also worth a stop.

After the madness of Las Vegas, we also went to Red Rock Canyon National Park, but that was the biggest letdown of our trip. There was only one prominent red rock and the scenic loop may offer some beautiful, wide views, but other than that, there isn’t much to see. Maybe we had been spoiled before, but I would never go back to this park. There are so much more beautiful things to see in the area. But of course if you do want to escape the madness of Las Vegas and aren’t willing to drive one extra hour, Red Rock Canyon does offer some peace and quiet.

5 thoughts on “Red Rock Canyon vs. Valley of Fire; what to do and what not to do?”