When we were planning our trip, I wasn’t completely over the top excited about Rabat’s sights even though there are quite a bit of them. Now that I’m back I found Rabat to be one of my favorite cities that we’ve visited on this trip.

Maybe it is because it was the first day the weather was actually nice and we got to enjoy the sun or maybe because I didn’t have high expectations to start with, but Rabat certainly won me over. A warm recommendation!

Finding a place to park our car in this city proved to be quite a challenge. Rabat was pretty busy at the time we arrived, but luckily we ended up finding ourselves a nice guarded spot at the intersection of Avenue Moulay Ismail and Rue al Mourabitine. It was actually a really decent starting point for the walking route we had planned.

Our first destination was the medina of Rabat. Yes, another one. It’s pretty hard to get tired of these colorful shops and bustling workshops. If you don’t like the hassling or bargaining when buying souvenirs, you have to head to ‘Rue des Consuls’. There you have fixed prices for all souvenirs. We found that some items were a bit more expensive than what you might get when bargaining, but at least you’ll probably won’t get ripped off badly and it saves you a lot of time.

Once out of the medina, we headed to the Kasbah of the Oudayas. This fortified city within the city was founded in the 12th century and has since then been inhabited by many different kinds of people. This was my favorite sight of Rabat. With its pretty blue winding streets it made me a little less sad about having missed out on Chefchaouen. I’m sure it’s not completely the ambiance of that city, but it certainly reminded me of the pictures I’d already seen of it. 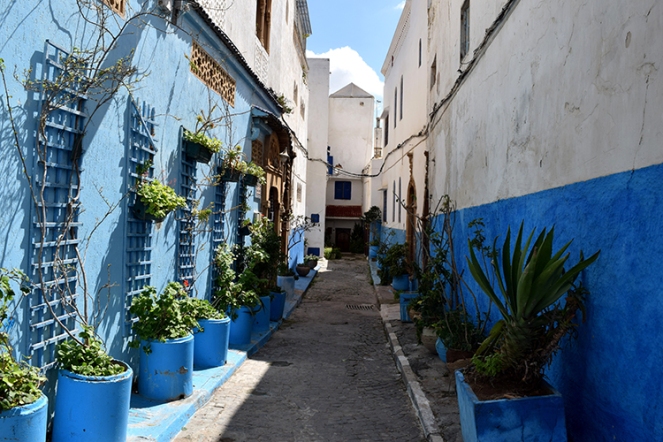 Next to the Kasbah one can find the Andalousian Garden. We spent quite some time in that garden just enjoying the sun. It isn’t such a special place but it was nice to just sit and relax for a while. The cats and kittens wandering around the garden can definitely keep you occupied for a while, especially if they keep following you around wherever you go.

When we had finally been able to shake of the kittens, we walked along the harbor, where you can spot the small ferries to go from Rabat to Salé, to another highlight of Morocco’s capital: The Mausoleum of Mohammed V and the Hassan II Tower. Back in the 12th century the construction of the Hassan Tower started and it was supposed to be the start of a majestic project that would lead to the hightest minaret and the biggest mosque. Sadly they never finished it and now all that’s left is the tower and about 200 colums. In its own way, it’s still impressive.

Across from the tower one can find the Mausoleum of Mohammed V. This mausoleum was built in 1950 and now houses the thombs of King Mohammed V and his two sons. It’s constantly guarded by royal guards, both inside and outside.

Before leaving Rabat behind us and continuing our road to Casablanca, we stopped at the Chellah Necropolis. This sight can be found about three kilometers from the center of the city, along a big road, so having a car to get there is pretty useful.

The Chellah Necropolis was built in the 14th century on the ruins of the old Roman city Sala Colonia, dating back to 40 AD.  There are – just like pretty much anywhere in Morocco – many cats wandering the site, but storks have also made the place their home. Entrance fee to this place is 10 dirham – bargain! -, and if you are by car you – as always- also have to pay the car park guard. 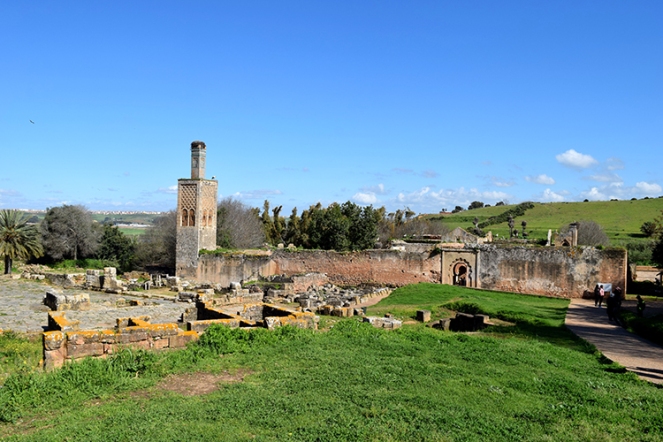 We spent about forty-five minutes wandering the place before hopping back into our car to drive the rest of the way to Casablanca. Rabat definitely made an impression on me and it think it might have even been my favorite day spent in Morocco’s cities. So don’t even consider skipping it!

One thought on “A day in Morocco’s capital Rabat”

I've travelled all over the world to visit national parks, but I hadn't even been to the only #nationalpark in #Belgium. Un-ac-ceptable! So today it was time to finally tackle that one! The #HogeKempen of course doesn't offer out-of-this-world views, but it was more than worth it to cross the country for the 13km and 6km #hike we completed.
It's no mountain range or a crystal blue lake, but it's not home, which in these times is already a big change of scenery! Yesterday and today I'm discovering the other side of #Belgium, the #Campine region! Beautiful nature views along the most amazing #cycling paths! We rode 120km yesterday but today we're strapping on our hiking boots to emerge ourselves deeper into #nature! 🥰
With that damned virus still having the upperhand, travelling abroad is currently, and for all of February, forbidden for me. Quite a bummer if you know that I always #travel this month. 😔 I could give you a full-on rant on how this sucks and blabla, but that wouldn't get us anywhere. Literally.
Just one of those views I'll never get tired of: The #Rozenhoedkaai in #Bruges! I've seen it many times by day, but only a handful by night. It's like magic! ✨
Standing on top of the #GrandVeymont was literally the top moment of 2020! ⛰️
After a whole day of rain the day before, waking up to a bright blue sky and sunshine felt like a small miracle. It's crazy how different a city can feel in other weather conditions.