Every time I told people who had been to Canada before about my upcoming trip, I got the response that Vancouver was just an amazing city with such friendly people and a really lovely atmosphere. So in the time leading up to our departure my expectations of this city had been rising every day. It got to the point that I was almost more excited about visiting Vancouver than the Rockies. Almost!

We planned to arrive in Downtown Vancouver late afternoon so we would have the entire evening and day after to explore this city before we would be departing for Vancouver Island early morning the day after. That seemed like enough time to get some impressions of this city. 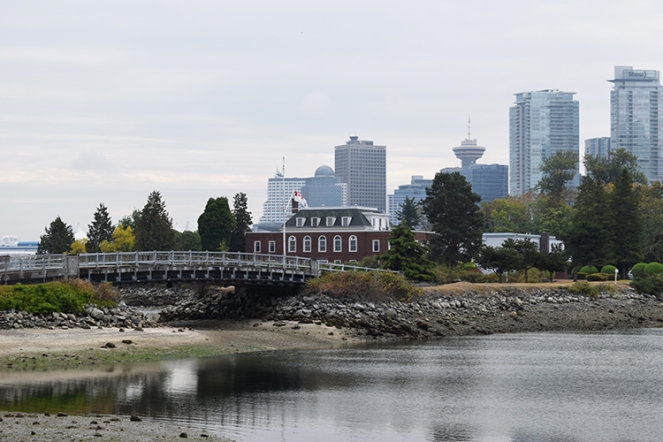 We did arrive in Downtown late afternoon even though we experienced some trouble with our luggage. One of our suitcases had decided to extend their trip on our layover location in London Heathrow and would only be arriving in Vancouver the next day.

To make sure we were available for the arrival of the luggage, we wanted to keep our schedule for the day after as light as possible. So instead of going up the Vancouver Lookout early morning the next day, we decided to go up that same evening after checking in at our Airbnb. The weather that evening was also better than what was in the forecast for Thursday, so that was an added bonus. Even though we were quite tired from a day of travelling, the beginning of the sunset behind the skyscrapers of Vancouver was just so beautiful. Although I must say that the mountains in the distance impressed me most as the buildings in Vancouver itself didn’t seem to be lookers. 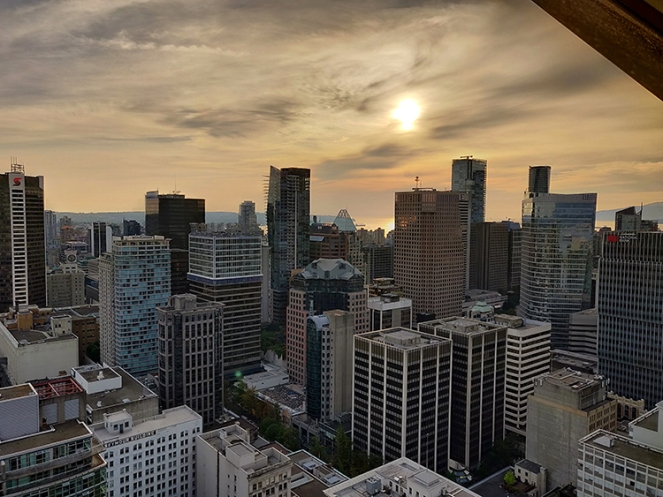 The Lookout was a really great way to start our visit to the city, but it wasn’t the ideal plan to get the maximum out of the ticket. One entrance ticket to the Lookout ($18,4 incl tax) gives you access to the tower for the entire day. So you can visit in the morning or early afternoon for a daytime view and then go back once more in the evening or at night for a night view of the city. Since we had already been awake for quite some time, we were too tired to wait for the sun to have set completely and didn’t go up another time. We also missed out on the full daytime view, so if you have the chance to plan the lookout on a full day with the opportunity to go up multiple times, go for it!

Thanks to a pretty little thing called jetlag, we were up quite early the next morning so we started our day with some exploration of Gastown with its famous Steam Clock and the Canada Place area before grabbing some breakfast. We arrived at our chosen breakfast place little after their 8am opening time and were surprised to find a long line of customers waiting to be seated. We found out later on our trip that this is quite common in Canada. People actually queue and wait sometimes to an hour to get a seat in a restaurant. So keep that in mind if you want to try to specific breakfast place or restaurant.

After filling our tummies with some delicious eggs, sausages, yoghurt and fruit, it was time to work off those extra calories again. We headed to YesCycle on Denman Street and rented some bikes to explore Stanley Park, a 405-hectare public park right in downtown Vancouver. The renting shop had tandems available so of course we were crazy enough to get one of those. We quite soon regretted that decision as riding a tandem isn’t as easy as it looks. After a while we got used to it though and we got some good laughs out of our misery so I still recommend going for it. Unless you have zero balance. Then it might be wiser to get a regular bike. Or no bike at all.

So helmet on and map in hand we left full of expectations only to have mother nature decide that then was the perfect time to have the skies release some excess water. So there we were, riding our bikes, in the rain, on the seawall of Stanley Park with a view on Vancouver’s skyline. Not an ideal situation, but boy did we have fun. Fortunately it didn’t rain for our entire ride along the seawall and we still got some beautiful views along the way.

After about two hours and 10 kilometers we returned our bikes and then it was time for a visit to Granville Island, one of Vancouver’s hotspots. The easiest way to get from Downtown to the peninsula is by ferry. So we walked from Denman Street to Aquatic Centre Ferry Dock and got on one of the cute tiny boats ($3,5).

Granville Island has many lovely shops and restaurants in the streets, but the highlight for me was the public market. There is plenty of fresh food available, so we took the opportunity to enjoy some late lunch over there. They have some tables on a balcony overlooking the stalls at the very end of the market. Both the sushi and the pizza we had were incredible so if you can visit Granville Island around lunchtime, you won’t have to worry about finding food. The hardest thing will be making the decision on what to eat.

To get back of Granville Island we had to take the ferry again, but instead of buying a return ticket to the Aquatic Center, we got ourselves another single to David Lam Park ($3,5). From there we walked along the water back to our Airbnb. The people at the airport had promised that the lost luggage would be delivered in the afternoon, so we wanted to be ready for that and we didn’t have anything else in the city that we wanted to see per se, so some relaxing seemed like a good idea.

By evening I was regretting not going up the Vancouver Lookout during nighttime the day before. So to stop myself from regretting it for the rest of my life – dramatic, I know! – I just went back, payed another entrance fee (that hurt a bit) and went up one more time. The mountains in the distance had of course disappeared but I just adore sights of cities lit up at night. There is something magical about it.

From the lookout we then walked back to our Airbnb through Gastown, which is also really beautifully lit up in the evening. The atmosphere there then becomes so lovely. A definite must to spend your evening in that area in my opinion. 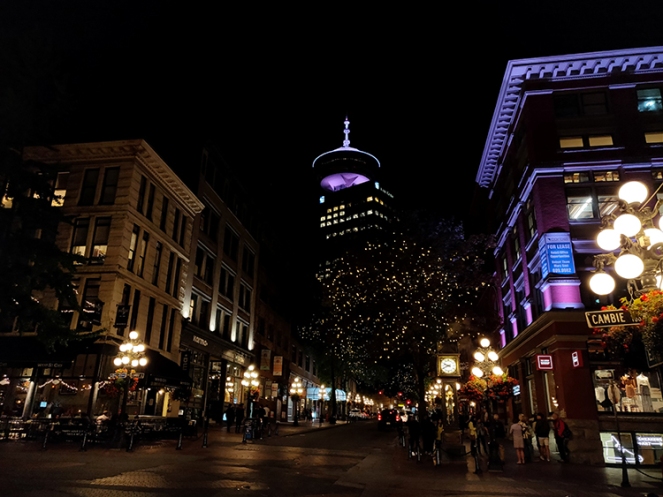 And that concludes our time in Vancouver. There is plenty more to see in the area but sadly we didn’t have enough time left to visit any of those. The most known attraction close to the city is the Capillano Suspension Bridge. We skipped that one because we would be visiting another suspension bridge and expected to see more nature views later on our trip. Another place outside of Downtown Vancouver that was on my list was Kitsilano Beach. From that beach you have a lovely view on the skyline of Vancouver, but since we wanted to stay available for the luggage – that eventually didn’t come – and the weather wasn’t that great anyway, we left the beach where it was.

Despite all the trouble, we had a really great time in Vancouver. It is true what they say about the people there being really friendly and the atmosphere being amazing, especially in Gastown in the evening. But I was somewhat disappointed in the general look of the city. I’m just not a fan of the style of their skyscrapers I guess. Plus, it probably doesn’t help that the weather was cloudy and my expectations were sky high. But it sure wasn’t a disappointment. I wouldn’t mind going back there one day!

3 thoughts on “Is Vancouver really as amazing as they say?”