On our second full day on Canadian ground, it was already time to take the ferry off the mainland and to Vancouver Island. Our final destination for the day was the capital of British Columbia; Victoria.

We left our Airbnb early in the morning to go to the airport as we had to pick up our rental car there and still sort out the lost luggage situation. Fortunately we were quickly reunited with the luggage –hallellujah! – and we even had to wait a while before we were allowed to pick up our car. Nothing some Tim Hortons coffee can’t fix.

Half an hour before our initial rental hour we sheepishly went to the Thrifty rental desk hoping they would already have our car ready. And hooray yes they did! Thank you, Thrifty! After checking our new, pretty, white Chevrolet Cruz for damage, we hit the road and headed to the ferry terminal. Along the way we stopped at a supermarket to buy some obligatory car snacks, cereal and lunch to eat on the ferry. We were roadtrip ready!

We sailed for an hour and a half which was the perfect time to discover the boat, have lunch and enjoy the view for a while.

Before we knew it, we were called to return to our cars as we would be arriving soon. We very swiftly drove off the boat – great organisation there! – and only about half an hour later entered the city limits of the beautiful city Victoria.

We had one day and a half to discover this city on the Pacific Coast, which was plenty for what we were planning to do. Since the weather was nice we immediately headed to the Visitor Information Center and informed ourselves about the Whale Watching Cruises in the area. And we were lucky! They still had a Sunset Cruise available for that evening. We didn’t hesitate twice and agreed to it. This way we would have the next day free of any time restrictions. Perfect!

We wandered around the harbor of Victoria for a while before making our way back to the hotel to change into other clothes for the whale watching. We would be going on a high-speed zodiac so with the night falling and the wind it would get a lot colder. And if there is something I don’t like, it’s being cold. So be prepared.

We arrived at the Springtide office, which is located close to Bastion Square, a bit before 5pm. After a short bathroom break and some instructions we were brought to our zodiac. There we got a one-piece suit to put over our clothes. Mine was waaaay to big but it didn’t bother me. In fact it was perfect because that way I could just strap my camera around my neck and hide it inside the suit when we were speeding over the water. Because yes, you do get a bit wet when you’re hitting the waves. It was so much fun though!

The entire cruise took three hours and with the Sunset Tour you – obviously – get to witness the absolutely gorgeous sunset while you’re spotting the whales. I found this to be the extra aspect that made it even more magical. 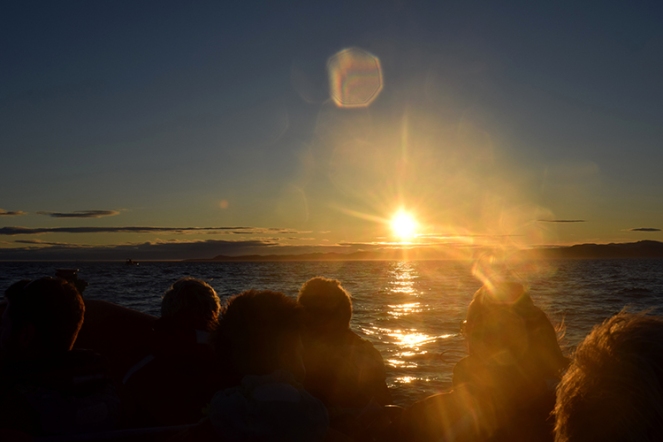 We first sailed past some beautiful nature before we actually went to the area where the whales were at that time. According to our captain we were very lucky as there were many whales around and they were happy to show themselves. And we indeed got to see quite a few. There weren’t any spectacular jumps or really close viewings, but it was just so amazing to witness those amazing sea creatures in their habitat. Extraordinary!

With that magical sunset and our really funny captain that liked to race towards big ships and against others ships we had the most fun experience. Sure it’s not a cheap activity at $119 but for me it was definitely worth the money.

Around 8pm, right before dark, we sailed back into the harbor. Since it was already quite late, we headed to Tacofino for a quick bite. Really amazing food there, and just perfect to end our first day on Vancouver Island.

One last look on the harbour by night, and then it was time to return to our hotel. High on the day’s experiences we were so excited to discover more of this city the next day. 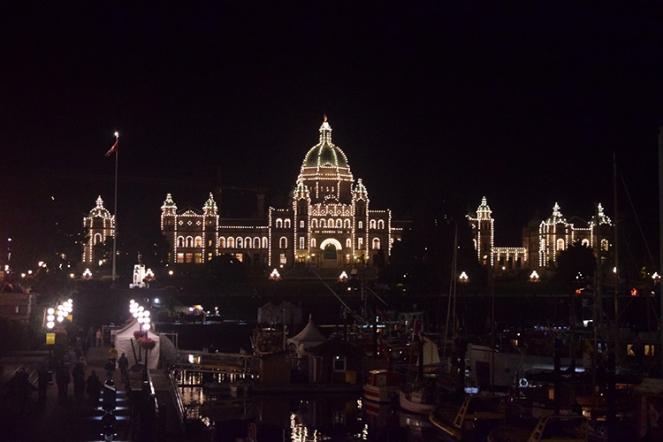 Curious to know what we did the second day? Stay tuned because that’s stuff for my next post!