After four cloudy, rainy days, we had just about had it with this mediocre weather. Sadly we couldn’t control the atmospheric conditions and to our disappointment another day of clouds was forecast. However we did control our destination! So if the sun wasn’t in the sky, we made sure to get some sun at least in one part of our day.

About twenty minutes north of the town of Banff, one can find Sunshine Village, a ski resort at a height of 2200 meters.  During the summer, this is a hiker’s paradise. And that’s where we headed for the day!

And as you can see, that was an excellent idea. The place didn’t steal its name that day. While it was cloudy in the valley, the sun was shining brightly up the top of the mountain. Hooray!

To get to the top, we had to take a bus as the gondola to the village wasn’t running on a daily basis during summer. A return ticket cost 36,75 CAD (taxes included) and allowed us to take the bus at whatever hour we wanted. There was one going up and one coming down every half hour on the hour and half hour.

One very, very, bumpy ride later we arrived in Sunshine Village. Before we were allowed off the bus, a staff member gave us some information and tips on the area. When she mentioned that three grizzly bears had been spotted close to the village the day before I was both excited and terrified at the same time. Seeing them from a distance would be the coolest thing, but I wasn’t all too eager to end up eye to eye with them. 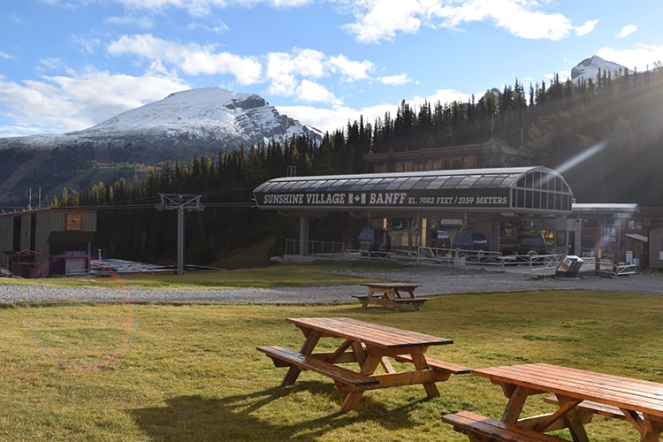 At the Sunshine Village there are multiple trail heads for trails towards the surrounding mountains and into the meadows. We didn’t really have a plan on what hikes we were going to do in the Sunshine Meadows, so we decided to just wing it and decided at every crossing which way we were going to continue. So unfortunately I can’t really tell you in detail about what trails we took, although I think we managed to cover most of the trails closest to the village.

But we didn’t need to hike all the trails to get the views. After only a few minutes, it was already clear to us that this place was just stunningly beautiful. The views we got right from the start were absolutely breathtaking.

Higher up the mountain slope we even got to hike through a thin layer of snow. It wasn’t enough for a snow ball fight or anything but just the fact that it was there was so magical.

A couple of hours after we’d arrived in the village, the clouds sadly won the fight and the sun disappeared. But on we went! And we may have been a bit too enthusiastic because suddenly there were no direction signs anymore and we weren’t all too sure about where we were and where the path would take us. Not wanting to take any risks – especially considering we found ourselves very close to where the bears had been spotted the day before – we turned around and retraced our steps. It was quite a steep hike back up, but we didn’t regret out little adventure one bit. Just the fact that we were all alone on that trail for about an hour made it all worth it! 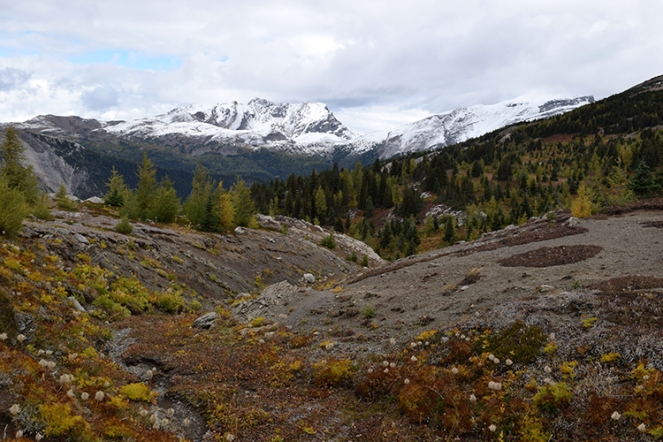 As usual, we had brought some snacks for lunch but considering we ended up back at Sunshine Village around lunch time, we stopped at The Sunshine Mountain Lodge for a warm meal. They had poutine on the menu so the decision was easily made. I hadn’t tried a poutine yet and I felt like I just couldn’t leave Canada without having tried one. And it was gooooood.

Belly full we were ready to discover more of this beautiful area. The Gondola to the village might have been closed but the ski lift from the village higher up the slopes was open for business. So to save ourselves a bit of the hike back up and because my friend had never been on a ski lift before, we took that one up.

The last hours in the Sunshine Meadows we spent circling the three lakes and once again we were rewarded with the most beautiful views. I could have stared at that painting-like view for hours and hours.

Oh and a fun fact, the Sunshine Village are right at the border of Alberta and British Columbia so during our hike, we did cross the border a couple of times.

I was quite sad the board the bus back to the ground station. This day had been absolutely amazing and I can’t recommend this area enough. Sunshine Meadows wasn’t in our original itinerary, so I’m extremely happy that my friends found out about this place and forced me to drop our original planning to discover this. An absolute highlight of our Canadian adventure!