Remember that time when I was in doubt about whether or not I should go to Berlin? Well, I managed to fall into that same trap again this year…

One of my best friends’ boyfriend lives in Barcelona so she often goes to visit him. She had plans to travel there again start of February and coincidentally another friend would be there at the same time. So the idea to travel in the same direction that weekend popped into my head and nested itself there. Should I go or not? Would it not cut my budget for my big trip to Norway (which is totally happening, by the way!)? Wouldn’t it be better to save the days off work for another trip?

I kept changing my mind every five seconds until during one lunch break at work I remembered the absolute feeling of joy I experienced in Berlin last year, so without a second thought I then and there booked my flight. And once again I don’t have a single regret now. Of course.

It wasn’t my first time in this popular Spanish city. I went to Barcelona back in 2010 on our senior year school trip and I had been there before with my parents as a child. But those memories were fading so I was extremely excited to discover this city again.

I arrived at Barcelona-Le Prat Airport Friday afternoon and my outbound flight was scheduled to leave again on Tuesday morning. That left me with three full days and four evenings to get my fix of vitamin D and soak up the beauty of this city. For me, this amount of time was perfect as I managed to see all I wanted to. I’ll provide you with my full itinerary later, but now I just want to focus on five places I saw that left me in awe and that you in my opinion certainly have to visit when you’re in Barcelona.

It was through Instagram that I discovered pictures of this gorgeous concert hall in the middle of the city and I immediately knew I just had to visit it. This is exactly my type of thing. I think this may even be one of the most beautiful concert halls I’ve visited. There was just so much eye for detail and symbolism. I absolutely loved it.

I chose to join a guided tour because I just wanted to learn all about every single part of this place. For those with a little less time there is also the option to go on a self-guided tour. I don’t know what parts of the hall you can visit then though. With the guided tour we were allowed on the balcony which has these amazing and colorful columns, so that definitely was an added bonus.

You can book your guided visit online – which I definitely recommend during high season – but they also sell tickets on site. The guided tour costed me 18 euros since I booked it a couple of weeks in advance. The regular price is 20 euros. 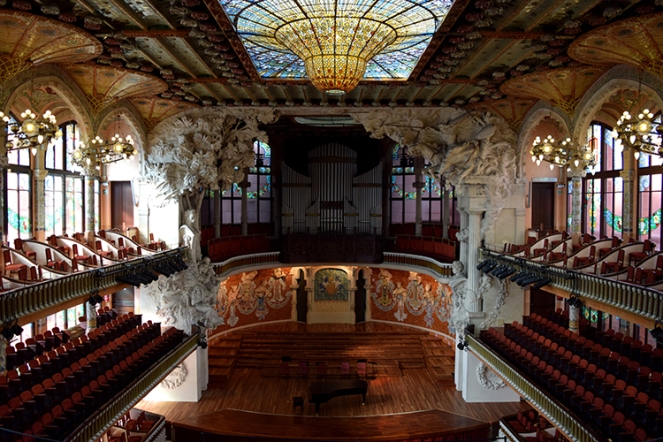 If it weren’t for my friend, I probably wouldn’t even have visited this UNESCO World Heritage site. I had passed it the day before and while I was impressed with the facade of the building, I wasn’t entirely sure about whether I should visit it. I had read reviews about people being disappointed so I was a bit in doubt. In the end I decided that I would only know if it would be worth it if I actually visited it. And it definitely was. I’m so extremely happy that my friend got me to visit it.

This old hospital consists of twelve separate buildings with the most amazing Art Nouveau architecture. It dates back to the 1400s and was a functioning hospital until 2009. Then they opened a hospital next to it so they could restore the place and turn it into a museum and cultural center. That opened to the public in 2014. The outside of the site is definitely my favorite part, but in one building they restored the original look of the hospital which was like being transported into time. Also the underground tunnels that connect the buildings were quite impressive.

Entrance to the hospital costs 14 euros, but there are also guided tours which are of course a bit more expensive. If I ever go back to Barcelona, I’d definitely go on one of the guided tours because it’s just such an interesting site with so much history.

On every citytrip I go, I’m always looking for the best spot to overlook the city. In Barcelona this was the old Spanish Civil War bunkers. The bunkers itself aren’t such a big deal, but the view you have over the city is just amazing!

I was there a tad too early as it’s supposedly the best place to experience the sunset but nonetheless it was just an amazing place to sit and relax for a while. Many people seemed to agree as I noticed many arriving with food and drinks.

You can visit this site for free – which is always an added bonus – but be prepared for a bit of a steep hike up. It’s all very much worth it though. 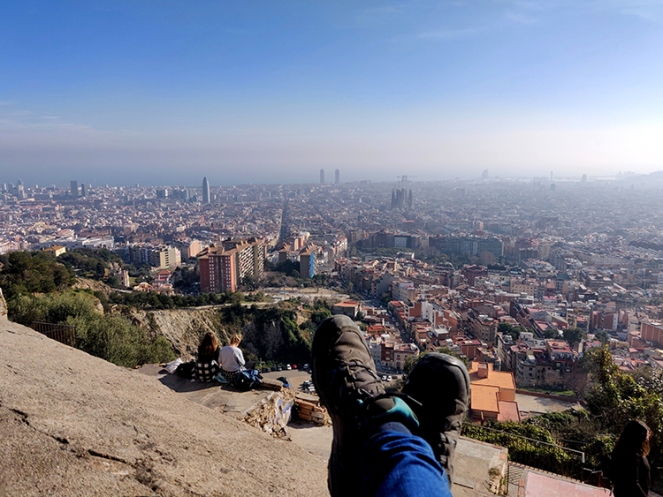 I know, it’s very much cliché, but it would be an absolute disgrace not to include this iconic piece of architecture in this list. I passed by it three times at different times of the day and every single time I still discovered things I hadn’t seen the previous times. It’s just so impressive.

My favorite time was the early morning. The sun was hitting the front of the church just beautifully.  But the sunset on the back of the building I witnessed the day before and my night time viewing were also very much worth it. I swear, it’s a treat every single time.

Still I decided against going inside the church as I had already visited it with school back in 2010 and I didn’t really want to hit the queues. If I’m ever visiting it again, it’ll be when this masterpiece is – finally – finished!

With this title I’m including a lot of stuff at once, but it’s just because this entire place is just really lovely. Montjuic is a hill on which many highlights are situated and gives a nice overlook the city and the harbour of Barcelona. For that last part, I’m already a fan. Yes, me and my city views.

The most famous view of Montjuic is the view on the Museu Nacional d’Art de Catalunya as seen from in front of the Magic Fountain. But it’s worth it to circle the building once at least as it’s just such a stunning piece of architecture.

Close to the museum, you can find the Olympic park. This was the main place for the 1992 summer Olympics. Mostly it’s just a great place to sit on the grass and relax for a bit.

On Montjuic hill one can also find Poble Espagnol. This Spanish village is an open-air museum of all architectural styles and crafts from all over Spain. It was built in 1929 as a part of the Barcelona International Exposition. Visiting this place was one of my favorite memories of my trip to Barcelona senior year. This time around I was a bit disappointed though. I guess it was because I was there way too early and there weren’t many people there yet. Also many shops were closed for an annual holiday so that didn’t help either. So if you include this in your itinerary, the late afternoon is definitely a better option.

And then last; on top of the hill there is of course a castle. And you can visit that castle.  Entrance price is five euros but on Sundays after 3pm, it’s free. From the castle walls you get an even nicer view of the city but it’s also just a lovely place to stroll around for a while. Nothing spectacular but still worth it. 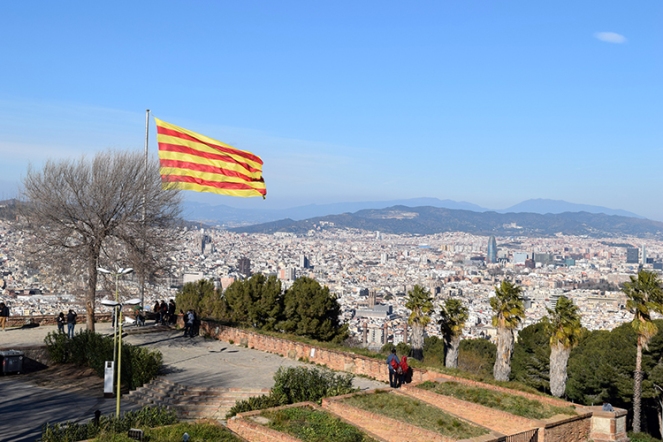 Of course there are many more highlights of Barcelona; ones that you also should have seen, but these five are just lovely memories for me that I feel everyone could really enjoy as well. I still plan to post a full itinerary of my trip soon and also a few food recommendations because honestly there is just too much good stuff around to just dismiss it.

If you have any questions in the meantime, don’t ever hesitate to leave me a message. I’m always happy to help.

Back home after six amazing days in Portugal's capital and I'm already missing the hell out of these stunning city views! 😍
So glad I was able to return to one of my favourite spots in #Lisbon 🇵🇹
One of my favourite sights in #Lisbon! 🇵🇹 Almost exactly eight years ago I was in #Belém for the first time and so happy to be back here now!
Wish I could have kept staring at these gorgeous snowy mountains but all good things come to an end... Our winter holiday was cut short last Thursday but the memories are still fresh! And it's once again confirmed; I am a mountain girl 🏔️😍
Cirque du Fer-à-Cheval, winter 2022 vs summer 2020.
I'll never get tired of views like these! 😍 From 3842 metres, an almost 360° view of snowy mountain tops! Hello Mr. #MontBlanc